There’s nothing more satisfying than a piece of cake with a cup of tea or coffee. The delicious aroma of homemade cakes has an instant appeal and it’s very hard to resist.

A family favourite, I usually make this cake with vanilla, chocolate and coffee flavours. However, I decided to try it with dark and white chocolate for a change. It was quite an interesting project. 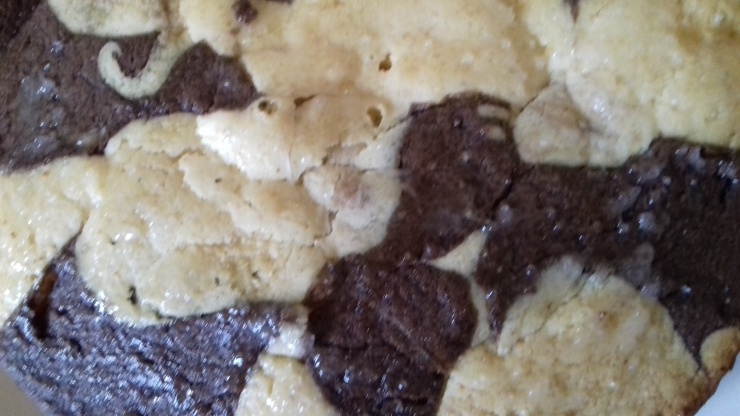 A marble cake looks great, but it’s actually very simple to make. The luscious swirl of the dark and white chocolate makes for a delicious contrast of colour and taste.

Grease and line an 8” cake pan with parchment paper.

Sift the flour and salt. Cream the butter until it is soft, add the sugar and continue creaming until it is light and fluffy. Beat in the eggs gradually. Fold the flour into the mixture, a third at a time, adding milk if necessary to make it drop easily from the whisk. Add the vanilla and mix well. Divide the mixture into two portions and add the melted dark chocolate to one portion. Flavour the second portion with the melted white chocolate.

Spoon tablespoonfuls of one mixture around the tin, leaving room for the other mixture. Fill the spaces with the second mixture and continue with a second layer alternating the flavours of dark and white chocolate. Bake for 45-50 minutes until a toothpick inserted in the centre comes out clean.

For the icing, combine the dark chocolate with 2 tbsp of cream in a bowl and melt the chocolate over boiling water. Do not let the bowl touch the water. When the chocolate has melted completely, set aside to cool. Repeat the process with the white chocolate and the remaining cream.

Spoon dollops of each mixture randomly on the surface of the cake and swirl with a toothpick or a skewer.

A Hint Of Spice

Hi. I am Padma and I am passionate about delicious food. Food is amazing in that it can take you to another place and time in your life just by the taste, smell and touch. Even a photograph evokes memories that lie dormant within us. I still remember a coconut candy that I used to eat as a child. Even though it’s not available now, I clearly remember the taste. It takes me back to my childhood pleasures as nothing else can. Being Indian, my palate is so used to spices. I started experimenting by mixing spices with European and other Western cuisines. The result is truly delicious. I love trying out different spices with different recipes. Sometimes I use the powder and sometimes I grind the spices with other herbs, onions, etc in the blender. The result is quite spectacular – a lovely fusion of the East and West. I hope you like my recipes and are inspired enough to try out a few of them. I would love to hear back from you. You can contact me at pvardaraj@gmail.com. View all posts by A Hint Of Spice

Unless otherwise stated, all intellectual property on this blog, including but not limited to original recipes, notes, and photographs is the property of the blog and its owner. My work may not be reproduced without my permission.

ALL RIGHTS RESERVED
© Hint of Spice