I found this recipe on Pinterest and I liked the simplicity of it. I had a lot of paneer and I decided to try it instead of tofu. One of the things I noted was that the paneer required a lot more cornflour. I also found that it was easier to fry the paneer as a larger slice instead of cutting it into cubes at the beginning. I cut them into cubes after they were done and gave them a final toss in the pan with the sauce.

I had cooked some Basmati rice and it was nice with the paneer. It’s also ideal to use as a filling for wraps. The honey sriracha sauce is really delectable. The paneer is crispy on the outside and soft inside. I also toasted the sesame seeds before adding them to the paneer. 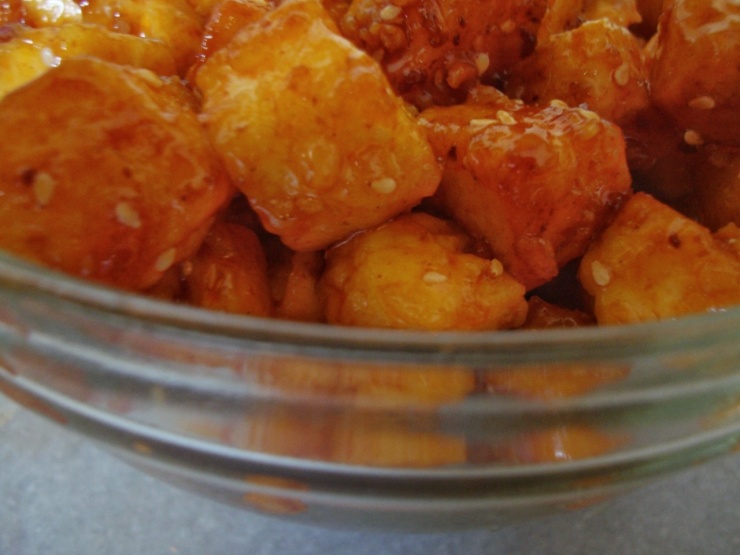 Paneer is made by coagulating the milk with lemon juice or yoghurt and the resulting cottage cheese can be used in a variety of ways. From appetizers to curries and even sweets, paneer is delicious and healthy. It is a staple food in many parts of India.

This dish can be prepared within 30 minutes and I guarantee you it’s going to be really popular as well. You can find the original recipe at https://pickledplum.com/house-foods-honey-sriracha-tofu/ .

Stir fry the sesame seeds in a small pan until they are golden. Set aside.

Remove the paneer from the package and wipe it gently with a paper towel. Slice the paneer and dust the slices with the cornflour until they are evenly coated and set aside.

Whisk the sriracha, soy sauce, honey and rice vinegar in a bowl and set aside.

Heat the oil in a large pan and when the oil is really hot, add the paneer slices and fry on each side until golden brown. Cool and cut into bite sized cubes. Toss the paneer cubes in the sriracha sauce and cook for a further 3 minutes in the same pan. Turn the heat off and add the sesame oil and sesame seeds. Stir to coat the cubes well and serve garnished with the scallions.

A Hint Of Spice

Hi. I am Padma and I am passionate about delicious food. Food is amazing in that it can take you to another place and time in your life just by the taste, smell and touch. Even a photograph evokes memories that lie dormant within us. I still remember a coconut candy that I used to eat as a child. Even though it’s not available now, I clearly remember the taste. It takes me back to my childhood pleasures as nothing else can. Being Indian, my palate is so used to spices. I started experimenting by mixing spices with European and other Western cuisines. The result is truly delicious. I love trying out different spices with different recipes. Sometimes I use the powder and sometimes I grind the spices with other herbs, onions, etc in the blender. The result is quite spectacular – a lovely fusion of the East and West. I hope you like my recipes and are inspired enough to try out a few of them. I would love to hear back from you. You can contact me at pvardaraj@gmail.com. View all posts by A Hint Of Spice

Unless otherwise stated, all intellectual property on this blog, including but not limited to original recipes, notes, and photographs is the property of the blog and its owner. My work may not be reproduced without my permission.

ALL RIGHTS RESERVED
© Hint of Spice